Madeline and Reece’s Destination Wedding in the Riviera Maya, Mexico Madeleine and Reece were “destined” for a destination wedding. Reece knew that he had to propose to Madeleine by the ocean. She says it’s her sanctuary, so clearly Reece was paying attention. So on a trip to Puerto Vallarta, Mexico with 4 of their closest friends; he decided that it would be the ideal location to pop the question. Reece took her out to the beach to go for a romantic stroll. Madeleine had no idea what was going on and was taking her time taking pictures of their footprints in the sand and enjoying the sunset. Little did she know that Reece was trying to find an optimally lit spot and perfect moment to read his letter to her before the sun went down. They finally found one and it wasn’t until he got down on one knee that Madeleine knew what was going on. She screamed “Are you serious?!” and accepted without a doubt. The story goes, the couple met on a busy dance floor in a country bar on a hot summer’s night while still in university. But they actually met for the first time through a cousin. Madeline was visiting her cousin Donavan in Cold Lake, Alberta, where Reece’s family lived at the time, and Donovan insisted they go on a ski-doo ride. They strapped Madeline’s sibling to toboggans behind the sleds, and Madeline rode behind Reece (holding tightly!). That was their real first encounter…. however it wasn’t until years later on that dance floor that they actually locked eyes. Here’s how Madeline describes the encounter: “I was at the bar for my friend’s birthday, while he was there as per their usual Friday night tradition. Donovan reintroduced us and that’s when we hit it off. We danced the night away and exchanged phone numbers that night. After a few Facebook messages, he finally asked me on a date. We caught a movie and bought delicious ice cream. We broke up 4 months later… but as you can expect this wasn’t the end of us.” They moved on with other relationships but always seemed to fall back together. “There was magnetic force between us that we couldn’t escape,” explains Madeline. “There was this energy, attraction, and relief whenever we were close. Almost 2 years after the breakup, Reece and I rekindled our relationship. Ten months later, after having broken up days before our trip to Mexico for his sister’s wedding, Reece proposed to me on a beach in Puerto Vallarta, Mexico. We completed the circle by getting married in same country exactly 5 years after the break up. We have a tumultuous story, but nonetheless it’s our story. We now have a stress free, simple, easy and incredible love for one another. Going through so much while we were apart makes us that much more appreciative of what we have now.” Madeline’s frankness and honesty is what makes this union even more endearing! Madeline, now an environmental scientist, and Reece, a project manager were instantly drawn to one another. Says Madeline: “We create the healthiest partnership; the best of me comes out when he’s around. We laugh uncontrollably together (sometimes at each other!), and we can ultimately rely on one another.” It sounds to us like they have amazing chemistry.

On February 19, 2013, surrounded by 50 of their closest compadres, the couple wed on the now infamous sky deck at the Azul Beach Hotel in the Riviera Maya Mexico. Overlooking the ocean, and filled with love, they said their “I Do’s” with a relaxed and carefree outlook. The absolutely stunning photographs were all taken by Citlalli Rico. Madeline’s most memorable moment was the exchanging of vows and the first dance. Reece’s most memorable moment was the speeches. 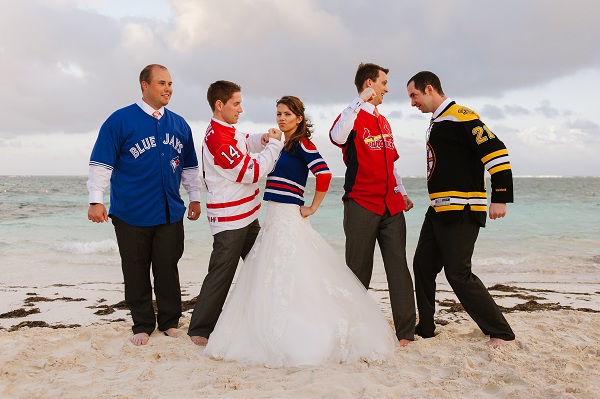 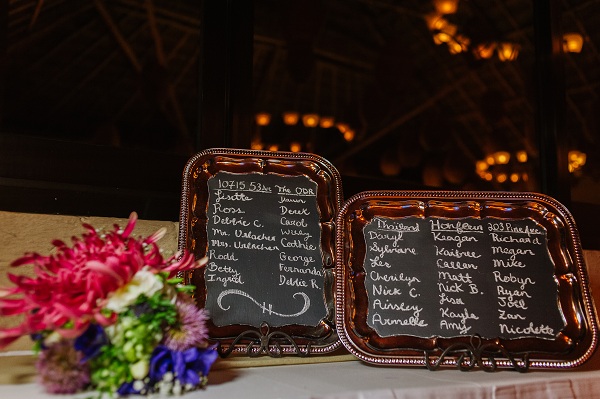 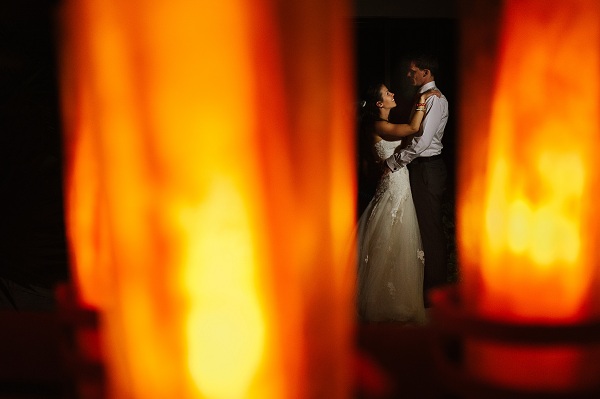 They danced their wedding song to Give In To Me by Garrett Hedlund and Leighton Meester (from the soundtrack to Country Strong) on the Blue Terrace at Azul Beach. Guests sipped on the Tropical Champagne signature drinks, and were treated with a special fire, drum and dancing show. 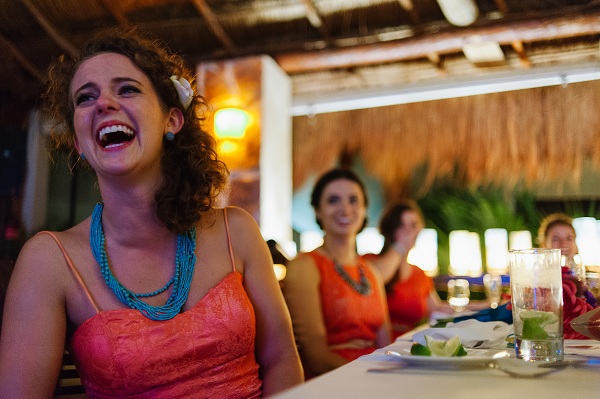 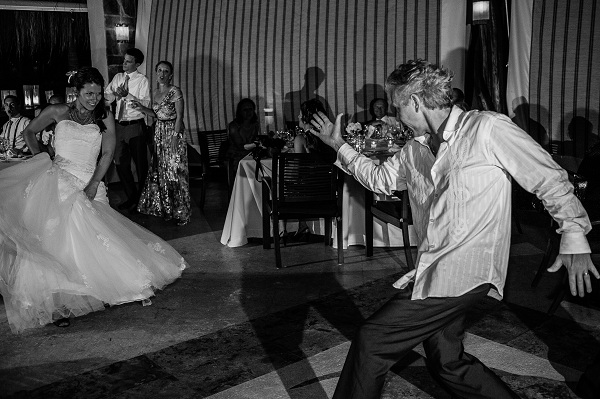 Real advice from Madeline and Reece: Buy a climate appropriate dress! And enjoy every moment of the wild, very quick ride. If anything doesn’t go according to plan, go with it! We had to wait 30 minutes for the Caribbean fire, dance and drum show to stop before we could continue with our reception because it was so loud. We made the most of it and ran up on stage and danced alongside the entertainment.

Also, during our stay we really felt that we took the time to spend quality time with each and everyone that came. The entire party went on a group activity, the boys went on a catamaran and snorkeling trip before the wedding and the ladies enjoyed a spa day. We had such a great young group that was always happy, and stress free. The food, staff, venue, landscape, weather and luxurious rooms all contributed to making our stay unbelievable and unforgettable. The only thing we would have changed is staying longer. 10 days was wonderful but we should have taken a few days to spend just the two of us. After all the wedding planning and entertaining guests for 10 days we really could have used down time together in paradise!

In terms of a honeymoon, they haven’t planned one yet! Maybe for their first anniversary, hiking Machu Pichu is in order. Lastly, how did they describe their day in just one sentence: “We’ve never felt so loved!”