Hyacinth and Damian’s Destination Wedding in the Riviera Maya, Mexico A huge congratulations is in order for Hyacinth and Damian! Their fun filled destination wedding is evident in the below pictures captured by XY! About the Hyacinth and Damian
Occupations: Damian works for Toronto Police Services and Hyacinth is a Resource Manager for an IT Consultant Firm.
How they met:  We actually met a long time ago back in 2002 through some acquaintances but we were dating other people at the time.  We’d bump into each other throughout the years at parties, etc. since we had mutual friends, but one of us or both of us were always attached so timing never worked out.  Then in 2009 we ran into each other again because we ended up working in the same building.  At the time both of us were newly single and our mutual friend decided it was high time he played matchmaker and he forced us to go on a first date, then a second, and a third………well you get the idea J
What attracted Damian to Hyacinth: Everything about her.  But for sure her beautiful face especially her lips.
What attracted Hyacinth to Damian: I worked in the same building as him and I’d see him every day in his police uniform. I’m not going to lie, I’m a sucker for a man in a uniform and he looked pretty damn good in his :p
What was the best advice you received as a couple? Always make time for each other and never take each other for granted.  Love each other every day like it’s the last time you’ll be with one another. Engagement story: After dating for three years, Damian set out to find the perfect ring for his lady.  In November 2012, he took Hyacinth for a nice autumn walk around the Toronto neighbourhood where he grew up as a child.  “I have such great memories of this place as a kid”, he says to her while he shows her around.

“This is where my brother and I grew up….,” as he points to one of the houses on the street.

“This is where I first met my best friend Kev….,” as they stroll through the park behind a school.

“This is where my friends and I used to play baseball….,” as they walk across the baseball diamond.

The walk down memory lane continues for some time until Damian walks Hyacinth towards a park bench at the top of a hill and says to her, “…And do you know what happened right here?”   Hyacinth shrugs and says “Let me guess…is this where you kissed your first girl or something?”

Damian laughs and says “No. Actually, this is where I asked my wife to marry me.”

He gets down on one knee, pulls the ring out of his pocket and asks Hyacinth to help him make one more great memory in this place and be his forever. Teary eyed and speechless, Hyacinth manages to nod a “YES!” and the rest is history. The Wedding Day
Wedding date: November 26, 2014 (1st ceremony in the resort chapel) & December 2, 2014 (2nd ceremony on the beach at sunset)
Number of guests: 60
Wedding colours: Red, silver and black
Hyacinth’s most memorable moment: Exchanging vows a 2nd time at our 2nd ceremony on the beach. It was more casual and laid back than the first ceremony, but there was no script this time around for our vows, and everything said between us was straight from the heart.  Then when our friends and family surrounded us for an epic group hug as they (jokingly) did some tribal chanting, it just made us feel so loved and lucky to have so many amazing people there with us that very moment.
Damian’s most memorable moment: Our first dance as husband and wife.  I held her in my arms and just thought “finally!” I waited a long time to find her and now she’s my wife.
Advice to others: Don’t settle if it doesn’t feel right. The right person is worth the wait, no matter how long it takes.
Favourite wedding detail: Our cake topper. Damian loves Stars Wars and Hyacinth likes Betty Boop, so they glued together a Darth Vadar booble head with a Betty Boop doll.  Added a tied to Darth and a little veil to Betty Boop, and voila, a custom made cake topper J
Most unexpected moment: Hyacinth’s mom crying. We knew Hyacinth’s dad and Damian’s mom would for sure cry, they’re both the sensitive type.  But Hyacinth’s mom is a tough cookie who rarely gets emotional or lets her feelings show. To our surprise she was the one that broke down first when she first saw Hyacinth in her wedding dress.
Most romantic moment: First dance as husband and wife. All eyes were on us but in that moment it felt like it was just the two of us there.
Did you include any traditions in your wedding? Yes, the Filipino tradition of the candle, veil, cord and coin ceremonies.
Honeymoon: We did a mini honeymoon right after the wedding and flew to the Dominican Republic for a week. We’re going on a longer 4 week honeymoon in Spring 2016 to Bali & Hawaii (it was originally planned for this Spring, but Hyacinth had to temporarily move to Poland for work for a year shortly after the wedding).
The day in three words: Amazing!  Fun!  Unforgettable! 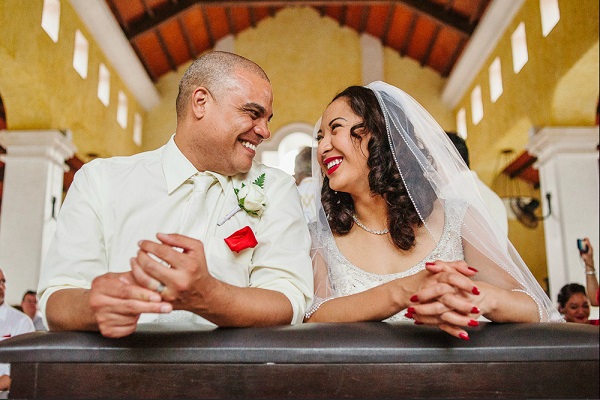 Wedding Details
Ceremony location: Grand Palladium Mayan Riviera (1st ceremony – Catholic chapel at the resort; 2nd ceremony – Las Rocas beach)
Reception location: La Laguna at the Grand Palladium Mayan Riviera
Why did you choose this location for your wedding? We heard the Mayan Riviera was beautiful plus we were looking to get married in a Catholic church/chapel.   The Grand Palladium had the most beautiful open air chapel onsite at the resort.  The resort itself was huge which was great because we had a lot of family and friends with us (60 ppl) and it gave everyone enough space to be able to enjoy group time together, but also divide up into smaller groups and be able to hang out separately.
Hyacinth’s gown: I’m horrible remembering brands so I don’t remember L  But first dress was a lace beaded A-line dress.  It had an antique ivory colour to it that made it feel vintage. That dress was more for my Dad and Damian (because they’re very traditional). I thought it was pretty but I didn’t love it like my 2nd dress. My 2nd dress that I wore at the reception was a “me” dress.  The entire dress had beads that looked like mirrors sown all over and it and it glittered like a disco ball at the reception. That was the dress that I bought entirely for myself.  When I first saw it in a store on Queen Street, I just loved it and I bought it on the spot.
Hyacinth’s shoes: Silver blingy peep toe heels
Damian’s outfit: Grey slacks, white shirt, white tie, red pocket square and white Chucks/Converse.
Type of rings: Damian’s – white gold band;  Hyacinth’s – diamond & ruby band
Jewellery: Swarovski necklace
Bridesmaid’s dresses: Red dresses, but each bridesmaid got to choose whatever style they wanted so they all had different dresses.
Groomsmen attire: Grey slacks, white shirt, red tie and pocket square, and red Chucks/Converse.
Wedding song: Let’s Stay Together by Al Green
Signature drink: Didn’t have one. We had Appleton Rum shots at the reception though to honour Damian’s dad who had passed away recently.
Favours: Maracas
Music: Jazz, R&B, Hip Hop, 70s Disco, 80s, 90s……a variety of music because our guests were all different age groups.
Flowers: Bride’s bouquet was white roses but all the flower arrangements at the chapel and reception were red flowers.
Photographer: Citlalli Rico (she and her sister were amazing!)
Hair and Makeup: We all did our own hair and makeup.
Stationery/Invitations: Hyacinth’s cousin made our invitations.  Since it was a destination wedding, they were done like a postcard.
Catering: The resort catered the reception.  We had 6 cakes made by Linda of Arte en Pastel and they were all amazing (especially the Red Velvet & Strawberry shortcake) Fun Stuff
Astrological signs: Capricorn (Damian)/Gemini (Hyacinth)
What was old? My mom’s buttons from her wedding dress that I put in my purse
What was new? The wedding dresses
What was borrowed? Necklace from my mom
Is there anything else that helps tell the story of the day? The day was amazing but we did have a bit of hiccup at our first ceremony.  The priest was totally unprepared and the whole ceremony was just a disaster.  He called Hyacinth by different names throughout the whole thing (Jesse, Jasmine, Yayacin).  He didn’t review the script beforehand so he was all over the place during the ceremony and almost missed doing the Filipino traditions.  Instead of letting us repeat our vows after him so we could look each other in the eye, he shoved a piece of paper in our faces and told us to read it.   It was an epic fail so thank goodness our wedding planner Alexandra was there to keep us calm right after the ceremony had wrapped up.  Despite that though, we decided to not let it ruin the rest of the day and we had a blast at the cocktail party and reception.   The mariachi band and the fire dancers were awesome (our guests still talk about it).   Our photographers were so much fun to work with and they were just amazing people.  The resort staff and Alexandra did an amazing job getting the reception venue ready and it was just breathtaking when we walked into the venue for the first time.   Despite the ceremony, the rest of the day was amazing and afterwards Alexandra made sure the resort organized a 2nd ceremony for us by the beach later in the week.  That 2nd ceremony was much more heart felt and it took place under the stars on the beach, which was so romantic.  Everyone was dressed casually and there was no script or program.  We just winged it and it ended up being the most memorable moment of the wedding week. 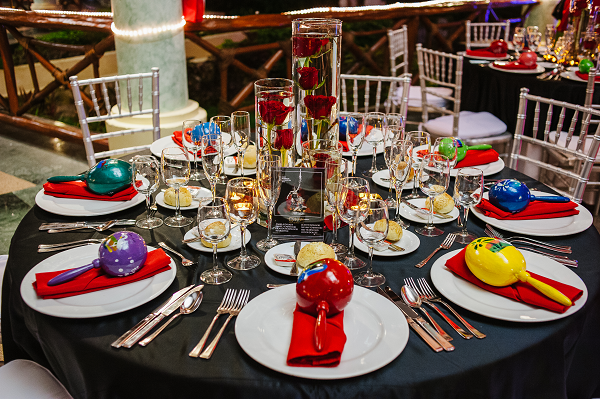 Tell us about your experience working with LUXE Destination Weddings: Alexandra Campbell was AMAZING!!  We can’t imagine how we would have been able to plan the wedding or even survive the day without her.  We can’t say thank you enough for everything she did.   Having her be with us at the resort was the best decision we made.   It allowed us to really enjoy the day and not worry about a thing. 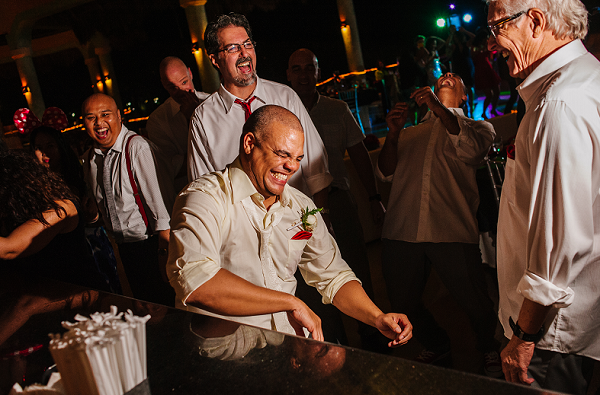