Donna and Hayward have such an amazing story! Congratulations to this wonderful couple on their recent renewal of vows – we just love their love story and feel blessed that they were so gracious to share it with us…. and you! It may look long, but do read on!

All about Donna and Hayward…

Occupations: Retired Military
How they met:  We originally met in the Sr. NCO Club on New River Air Station in Jacksonville, N.C.  After watching me laughing, drinking and dancing with several Marines seated at my table, Hayward finally came over and asked me for a dance.  Within a couple weeks after our first dance, we went out on our first date and we were never apart again after that.  Our vow renewal was a surprise for my husband.  I planned the ceremony over the span of a 12+ month time period without him knowing anything.  And to explain how and why this “secret” vow renewal ceremony came to be and was so precious, you must have the background information concerning our initial wedding.

My “boyfriend” (at the time), an E-9 in the U.S. Marine Corps, was deployed to Iraq when he asked me to marry him and I ended up purchasing a beautiful home for us.  My family are quite religious and do not believe in the idea of couples living together without being married, so drastic measures had to be taken if we were to live under the same roof when he returned from his deployment.  I decided that I was going to surprise him by our getting married on the flight-line… as soon as he touched down in the helicopter from the deployment… there would be hundreds of people there, at low to no cost as we just purchased a home and were now expending money to decorate/remodel it, several media outlets would be present, etc… it would be perfect! I immediately contacted a Chaplain in Jacksonville, N.C. and asked him if he would marry us… he said yes, with one caveat…we both had to have premarital counselling before he would marry us.  I asked him to provide the premarital counselling for me only (I had to drive over 1 ½ hours just to receive this counselling) and I informed him that I would ensure my “boyfriend” received counselling at the deployed location and would let him know of the arrangements I came up with.  I then contacted my “boyfriend’s” Commander on the ship, told him about my situation and asked for his assistance in having my “boyfriend” receive the necessary premarital counselling.  As my “boyfriend’s” boss, he thought my idea was great and was happy to help.  He contacted the ship’s Chaplain and told him the story.  As my “boyfriend” took a break at almost the same time every day, it made it easy for the Chaplain to simply meander out to the break area and have “discussions” about marriage, life, expectations, etc. with him.  Once my “boyfriend” had completed the necessary number of counselling sessions, the ship’s Chaplain contacted my Chaplain and informed him that the requirement had been met. In the meantime, I explained to my “boyfriend” that we needed to get the marriage license and have it ready… just in case… so, he needed to send me a power of attorney for me to procure the license.  He did and I procured the license.  He had previously told me that throughout his numerous deployments, during his almost 30 years in the U.S. Marine Corps, he never experienced the pleasure of returning to his family members waiting for him and how was rather troubling.  He asked me if I would contact his family in Georgia and inquire as to whether or not they would be able to come to see him return from what should have been his final deployment.  I agreed.  I immediately contacted his family, told them about my plans and asked them to be present as a surprise.  His mother (who had never been out of the state of Georgia and was sick), one of his brothers and 2 of his sisters decided to come.  When he spoke to me again, he asked if I had contacted his family and I told them that I had contacted them, but they would NOT be able to come down… he was hurt and I hated to lie, but kept in mind that this was supposed to be a monster surprise! The day of his return came quickly and several of my family members were present, his family members and a few of my personal friends were present and anxiously awaiting his return/the ceremony.

While waiting, a friend of mine got hungry and decided to go find something to eat.  While in line, she ran into a radio personality and told him about the impending ceremony.  He asked her if I would come over and do a radio interview with him and she said she would ask me.  The radio personality then went and informed several of the news crews and the all began requesting interviews as well.  I agreed to give the radio interview ONLY after I knew he would not be able to hear it from the helicopter and I agreed to give the news interviews only if they agreed to stay out of sight until the ceremony began…at the very least, so they wouldn’t blow the surprise.  After he landed and we managed to find each other through the crowd, I led him to the prearranged place for the ceremony.  The Chaplain then approached him from behind, tapped him on the shoulder, provided a brief explanation of what was slated to happen, and asked him if it would be alright with him if he were to marry us.  The look of shock and surprise was absolutely hilarious, but he agreed and the ceremony began.  The camera crews came running and filmed the entire ceremony!! My now husband received the surprise of his life when he not only returned to a wedding ceremony on the flight-line, but his family was there to witness his return and his marriage.  This was officially my husband’s second time being surprised by marriage and his reaction this time was even better than the first time! It was a fantastic day!!  It was all the more precious because shortly after the ceremony, his mother succumbed to her illness and passed away… how special this made our day… her presence on our wedding day and in support of our union!
What attracted him to her: Personality, Smile
What attracted her to him: Personality, Confidence
Engagement story: We got engaged by telephone… not very romantic at all! He was deployed and during one of his telephone calls home, he blurted out, “Well, do you want to marry me?” Although I pointed out the lack of romance in the way it was said, I said yes and the rest is history… The Wedding Day
Wedding date: 22 Oct 2003 / vows renewed 24 Dec 2011
Her most memorable moment: Seeing his face after emerging from the limo – when he realized he had been tricked once again and the bride and groom were actually us.
His most memorable moment: Same
Advice to others: Destination weddings/vow renewals are absolutely fantastic! We had the time of our lives. Beautiful setting surrounded by family and some friends…priceless!
Wedding song: “All I’ll Ever Ask” by Najee
Fave wedding detail: The anticipation on the drive to the ceremony location
Signature Drink: Lavender Lemonade
Most unexpected moment: When several horses decided to walk over to the ceremony location and visit with us.  We got some great pics of the moment… it was so sweet!
Honeymoon: As we were on a cruise already, we continued on and simply called the entire cruise the honeymoon…definitely beats our first honeymoon to Las Vegas, NV hands down!!! I came home broke and totally hung over…this time, I came home with priceless memories, well rested, a nice golden bronze tan, dozens of mementos from the islands and no hangover!
The day in three words: Breathtakingly beautiful & unforgettable 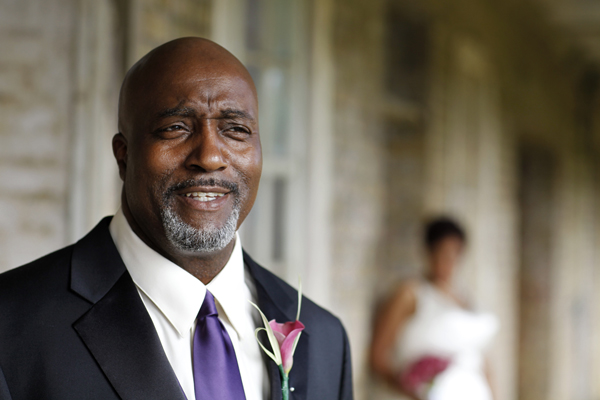 Astrological Signs (hers) and (his): Pisces and Virgo
Type of Ring: 14 karat WG 1 Carat Leo Diamond Wedding Band for me and a 14 karat WG 1 Carat Diamond Wedding Band for Hayward
Wedding Colors: Lapis and white
Bride’s Shoes: Bridal beach sandals – Nina Hilaria in Ivory
What was borrowed? Blue sapphire and diamond hair pin
What was new? The pearl earrings and necklace worn for the ceremony
What was blue? An infinity symbol brooch
Most romantic moment: Walking hand-in-hand to the limo as a newly vow-renewed couple WHAT WAS YOUR EXPERIENCE WORKING WITH LUXE DESTINATION WEDDINGS: Alexandra was absolutely phenomenal in helping me put together this ceremony.  She took my vision and transformed it into something absolutely beautiful.  She patiently answered all my questions and put together one heck of a ceremony… even though I didn’t make it easy on her by changing my mind more than a dozen times before the actual ceremony. Alexandra, I cannot thank you enough for all of your hard work and patience! You did me proud!!!!!

Just the Two of Us Elopement Package

Gavin and Garret’s Real Wedding at the Royalton Riviera Cancun